Drinking is Getting Hard: Hooked on Hard Cider

Way back when I was in Culinary School, I took an elective class on Fermentation. One suggested read was Sandor Katz's Wild Fermentation. I quickly picked it up and have tried only a couple recipes from it (tempeh, mead). But recently I decided that with so much delicious apple cider coming into Chicago from Michigan, I wanted to try my hand at a homemade Hard Cider. The recipe is really only quite simple instructions, so I doubt it would violate any legal grounds to simply explain it in my words:

Grab a gallon of fresh cider, without any preservatives or any over-modifying procedures. All ciders sold around here are pasteurized. Many contain preservatives. So look for those with one ingredient, apple cider. I found Hy's Cider from Romeo, Michigan at Whole Foods for $5.99 a gallon. I had a couple old empty "Louisiana Hot Sauce" jugs so I washed and sanitized one well. I then poured the cider into the jug and covered the opening with some cheesecloth for a couple days while storing it in my pantry at 65˚. 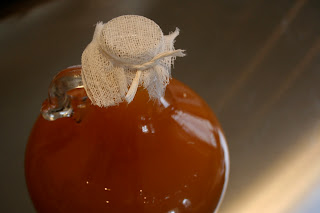 While Wild Fermentation said that some "boil-over" would occur, the inner-bubbling never got that exciting and nothing left the top of the jug. Once the main fermentation bubbles subsided, I took the jug and replaced the cheesecloth with a stopper and air-lock. This allows the released gases to escape but prevents other bad things from getting inside (bugs, too much wild yeast, etc). 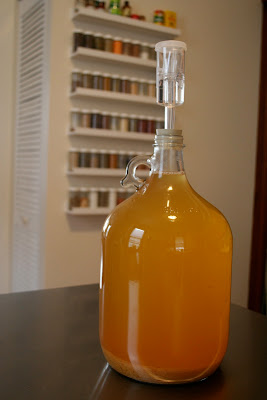 As you can see at this point about a week later, the sediment from the cider had settled to the bottom of the jug. The airlock was releasing about every five minutes and things had well slowed. I began to get more excited about this simple procedure and had picked up another gallon of cider to start another batch. Rebecca was curious as to how our attempts might end up tasting, so I also picked up a bottle of Crispin's Cider. We drank it that night and I had an idea. I have read plenty about "inoculating" beers with the residue left in the bottom of other beers, so I decided to add the little bit left from the Crispin's into the newest batch of cider. Unlike the first batch, the second batch was bubbling away in 2 days, and it was going wild! It had boiled over as Katz had mention in his book, and it bubbled that way for days. Because of this, I changed the cheesecloth every 2 days and also kept clean the outside of the jugs. 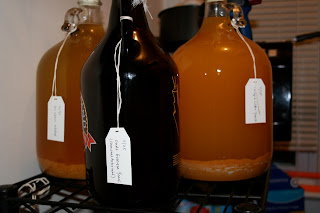 So this got me excited about the next trip to WF and how I wanted to do the next batch. Or should I say, what sediment I wanted to add to it. I only had a growler from Goose Island so only a half gallon would fit. This time I grabbed a Belgian Gueuze, know for it's sour and yeasty tastes. Again, within a couple days the growler was boiling over. Even after the first batch our pantry took on this yeasty, cidery, delicious smell and every time we entered we were reminded of what hopes we had for the future! So much so that we have added another 3 gallons to the experiment. This time we went with two different ciders but only added sediment to one. We bought one gallon of Grandpa's Mill Cider from Coloma, Michigan and two gallons of Seedling Farms Cider from Southhaven, Michigan. We added sediment from Ommegang's Biere de Mars with its Brettanomyces strain (a yeast used in beer making also know for it's unique flavors) in hopes of something exciting. 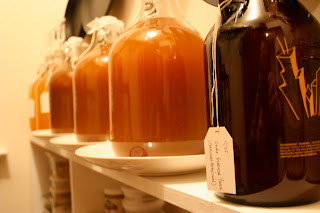 Since we don't have much room to store any more gallon jugs or growlers, this should likely be the end of this season's cider-making. Unfortunately it is a long process, though little effort is involved as you can see. About 4 months after the date I poured the ciders into their jugs, I will bottle them. Being a home-brewer I have all I need for that: sanitizer, bottle-capper, bottling hose, siphoning wand and caps & bottles. I will bottle them leaving behind most of that very visible residue and allow them to age about another month in the bottle before we will crack them open and do the first tasting, right around my birthday. Notes will definitely be posted here for you to enjoy. We wanted to post this now though, while cider is still available so you might venture as well in this realm!

It's been two months since the last batch went into the fermentation jugs and things look pretty good. All 5 gallon jugs are pretty clear. I can't see through the .5 gal. growler bottle but I feel good assuming it looks as good as the rest. Pretty soon I'll buy some more bottles and some priming sugars and bottle them for their last rest before I start drinking them some time around mid-April. 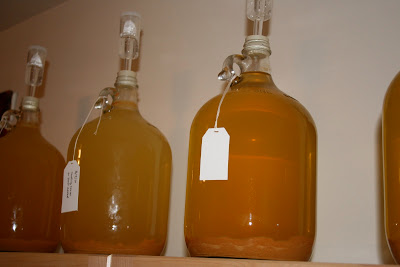 For control purposes I am going to bottle each one 3 months after it went into the jugs. I am considering using different forms of priming sugars (powdered, honey, etc) but I am still unsure. I might keep it simple to eliminate too many variables. Stay tuned!