As I got started making different types of charcuterie I quickly saw my needs grow as the variety of types of things I wanted to make also grew. When I was just making smaller batches of air-dried items I was able to get by sufficiently with a place to hang items in my kitchen or pantry. That required some creativity to help maintain air-circulation and proper humidity. While most of my projects turned out well, they were never as good as I wanted them to be. Most of the trouble I ran into was maintaining a relative-humidity that allowed the meats to dry at a slow and steady rate. Case-hardening is an issue. If the items dry too quickly the outside can lose moisture while the inside doesn't. When the weight loss is too quick it doesn't allow proper changes throughout the meat to take place that lead to taste development through enzymatic changes that require a longer timeframe. So after having made several items that suffered in one way or another, mostly from these issues, I was ready for a better, yet affordable way to fix these problems and maintain success with other important aspects like temperature and air circulation.


The over-all chamber is what I would refer to as medium sized. It takes up a footprint of 18" X 48". The size is that of the InterMetro Rack that houses everything. It is 74.5" tall. I bought the black Metro rack for about $150 at The Container Store. It comes with four shelves, a top, the two middle shelves and a bottom. I arranged it so that the top is flush, the bottom is a notch or two off the bottom and the two middle shelved are equally spaced between top and bottom.

As you may have read a couple months back, the Atlanta Nosh market has been cancelled. The organizer suddenly announced it "closure" and left many of the vendors wondering "what's next?" Luckily a former vendor has stepped up and had continued to operate a market with many of the same vendors. As a matter of fact, it is being operated as The Atlanta Underground Market, the original namesake of the original market we first started our Atlanta venture under. For more info on that check out the last post.

For the return to the AUM format we have switched up our approach a bit. We are doing housemade sausages and a Cured Plate. All the sausages will be served on H&F Bread Co. buns. For every market we plan to offer up our Signature Smoked Sausage. It is an all pork sausage with several spices that is smoked with an Apple and Pecan wood-blend. For the market we offer it in a simple and classic way, topped with yellow mustard and diced onion (Vidalia when in season). We will also offer these in take-away packages so you can enjoy them at home! 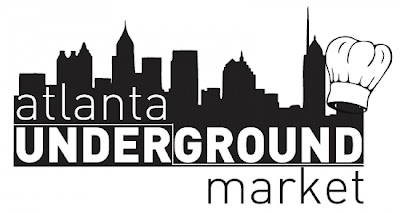 So it has been with great happiness that our opportunity to bring you not only instruction and inspiration via this blog, but also a chance to try some of our tasty creations in a continuing collaboration of talented and hopeful culinary dreamers. We have continued to see so many new faces that appreciate and support the vendors who put so much time into their food, marketing and presence! I am now hoping that everyone who may have been jaded or unimpressed by any previous incarnation (AUM v.1 or Atlanta NOSH) comes back out and gives v.2 a run. If you aren't already a member, or if you are and haven't been keeping up, be sure to check out the website and get involved. Your tastebuds will thank you and so will all of us!

Things seem to have been quiet around here since the cancelation of Atlanta Underground Market and Atlanta NOSH market. I was quite busy at work with some big events and I am still trying to find an ideal meat supplier. But things are definitely about to turn around for Low on the Hog.

Over a month ago Rebecca and I learned that we were going to have to move when our landlord received an unexpected offer on the house that he couldn't refuse. Immediately we were upset, saddened and frustrated. But as we tend to do we turned those frustrations into a chance for improvements in areas we thought we already had it all worked out. We found a new place in Atlanta with even more to offer than our current digs. It's larger in size, has a more usable landscape and is even closer to our friends and jobs. But what does this mean for Low on the Hog and our friends?

Email ThisBlogThis!Share to TwitterShare to FacebookShare to Pinterest
Labels: News and Updates

Atlanta Underground Market outgrew itself. Over 1000 attendees becoming the average, combined with more and more vendors wanting a piece of the action and the organizer's desire to bring more to the masses eventually led to a change. AUM was ended and Atlanta Nosh was born. Changes were many. It was to become a weekly market. It would be held outdoors. Take-home vendors were to be included. Licensing was to be required. And it was going to have a permanent home. Admission was still to be charged and the methods of operation other than those just listed were also to stay the same.

After a couple weeks of markets not going as planned, the organizer saw something needed to be changed. It was about this same time that we had met the licensing and vending requirements. I contacted Michaela and told her we were ready to start the new leg of the journey! She asked me to wait a couple days and she would fill us all in on the changes. As she said, a couple days later she let us all know about the changes. Nosh was moving from a secured parking lot to an on-street location in Atlantic Station and there would no longer be an entrance fee. Most of the other details went unchanged. At this point we were even more excited about being involved with more exposure and higher attendance!