So it turned out that Atlanta Underground Market was becoming so popular that it had to surface. So we immediately signed up when the date for the last market was announced. We had been doing well, selling most of our goods, and having many repeat customers. All that being said, it almost didn't happen. Rebecca's cousin ad recently become engaged and was having their engagement party, in the next state over. I asked a couple co-workers to help out and ask Rebecca to make my apologies for me. Heck, I even had a back-up helper in case the first one backed out. We had learned a better way to operate from each market and this was surely going to be the easiest one yet. The menu had been decided upon and shopped for. All advanced prep had been done and everything was set.

The menu was again three things, two of which we repeated from the previous market. The Scotch egg had sold out lickety-split so it was back. The Pork-rinds are always a hit. And I had a great sandwich up my sleeve to knock all their socks off. The organizer said that there was another event being held next door, so we should be ready for a big turnout!

Towards the end of January we had another opportunity to participate in the Atlanta Underground Market. Unlike all the previous markets, including the one that we had done, this was going to take place on a Sunday at Brunch time. All the others had been Saturday evenings. We felt like whatever we may have learned about the diners' habits last time might be thrown out the window with such a change!

This next market took place in a Midtown location even more centralized than the previous. For this market we kept with the original charcuterie+offal plan and we upped the ante by one more dish for variety. Our charcuterie dish requirement could technically be met by any of the three dishes we did that night. The last job I had before leaving Chicago was at Pleasant House Bakery, an English themed savory pie shop on the Southside. So I chose a couple dishes I had done there. First was a sandwich of English Rashers (back-bacon) served on H&F BreadCo. ciabatta with a piccalilli, another saucy pickled vegetable topping that is popular across the pond. This sandwich is traditionally called a Bacon Butty. I was first exposed to it as such when I staged at St. John Bread & Wine in London (served there with ketchup, the piccalilli came on something different).

In my research into Atlanta when Rebecca and I started considering a move to The South I came across a monthly event meant to bring home cooks to a common area to share their goodies. The Atlanta Underground Market was a place where non-licensed cooks could go and sell/share their treats with those who were willing to look past legal requirements and rules for selling food to the public. To do so, attendees had to sign a waiver agreeing that they knew what they were getting themselves in to. They couldn't hold anyone responsible for anything that might have gone wrong, and in exchange they got to try foods that might not have been available from regular restaurants around town. Organizer Michaela Graham was big on unusual foods (bugs, offal, etc) and was really pushing for those foods. But she seemed to find a plethora of baking goddesses instead!

We went to our first AUM in November. It was held in a church gymnasium in a near-south suburb of ATL. There was a good deal of everything available from the approximately 30 vendors there that night. A couple were already legal local restaurants and caterers, others were immigrants cooking their comfort foods and some were actually cooking up some offal dishes. I loved what I saw and enjoy (almost) everything we ate that night. We wanted in! After contacting Michaela and ironing out some details (she didn't want direct competition with her charcuterie guy though there were 3 cupcake-esque joints there that night) we were welcomed into the next event. Since we were going to be out of state for the next event, we signed up for the January date. 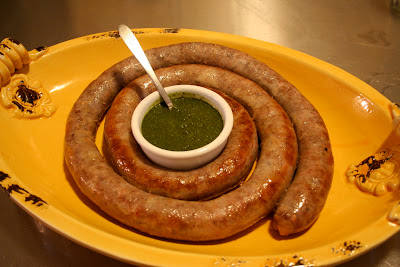