As it is about 12 weeks since my motorcycle accident, my leg is finally allowing me to get around fairly well. I can run errands and sit comfortably in most normal situations (I could barely get comfortable sitting in a restaurant chair for even a short meal). I have even gotten back into the home kitchen, too, and I hope to get back to some home meat-curing with some regularity. Thanks for bearing with me while I posted more reviews and great finds in a consecutive manner than I ever planned during the inception of "the Hog." I'm hoping now to get back to some of my own stuff for you all to enjoy and hopefully learn something from. 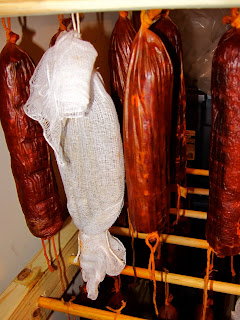 Some of the last things I had worked on before the accident were actually a couple items I had made for the wedding to use on a meat and cheese platter after the dinner had cleared. These items included some 'nduja, beef bresaola, pickles and some jalapeno jelly. Of course 4 weeks to the day before the wedding I had my accident. But with a ton of help from my wife Rebecca and our good friends Henning & Emily, everything was finished successfully and was thoroughly enjoyed by our party-goers! We were even able to knock-out some homemade favors for our guests like more jalapeno jelly, a smoky spice rub and some dill-pickled green beans.

I decided to have the meats and cheeses put out after the main courses had been finished, allowing a bit of grazing for those that wanted to munch for the remaining few hours. We had some great cheeses: Herbed Chevre, an English Cheddar brought from London by my new sister-in-law, a Spanish Manchego and a domestic Blue. We added some accouterments like dill pickles, giardineira, bread and the jelly. Our meat plate was accented by some mustard and more bread.

The meats were a hit! I am sure the cheeses were too, but since most of the guests seemed to know that we created these items ourselves, they were quite happy to voice their enjoyment with Rebecca and I. My favorite story was about the male guest who had already gotten into his car to leave. When his wife made it to the car and told him the sausages had arrived, he came back and stayed stationed at the table for a good amount of time before finally giving in to tiredness.

The 'nduja was labeled with a sign that said it was pretty spicy, but it didn't seem to deter many. The heat was undeniable. For only having 20% pepper content, it sure didn't lack that back-of-the-throat burn. While Calabrians are known to average about 30% pepper content, my mere 20% didn't leave many searching for the heat. The texture was a bit more meaty than creamy. This was because I was going for some more tooth and included pork shoulder in my mix, 50% to be exact. The texture also wasn't quite as spreadable as its creamier version, but with the addition of some extra virgin olive oil, it took on all the spreadability you would need, without compromising any of the sausage's great qualities. After the addition of the oil, it took on a texture much like the inside of a Slim-Jim style meat-stick, spreadable but somewhat toothsome. A couple of the sausages had started some molding on the outside but it was minimal and of the good quality. On some of the links I did find some hold had grown on the inside in the space left at the ends between the knots and the tips of the shrunken farce. But it simply scraped that off and ate away! 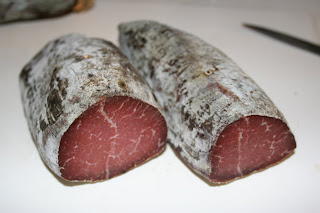 The bresaola was, in all honesty, my biggest surprise. It was my third attempt after the first two I did simultaneously not so long ago. While the first two were quite tasty, I wanted something more of a hybrid of the two. So I took the components that gave the most favorable attributes from my first round and created this newest version. Not being able to keep a close on the drying myself (I was still in the hospital), Emily did a great job of taking pictures and keeping me updated and then following my directions to correct any troubles. They took on more mold growth than I expected since we had taken good measures to control the environment in their "drying room" that they had graciously allowed me to create in their condo. Luckily, none of the mold was bad, and all the good stuff leant a great old-world taste when it covered my eye-of-the-round.

For the wedding I instructed the caterer to slice it as thin as possible for it's presentation. To my horror, I found it cut into rough chunks. They were small enough to eat but I was afraid it was going to be tough to eat. But when I took my first bite I was shocked by it not being too chewy to enjoy. But what surprised me even more was its fabulous taste. You got the herbs, the wine, the spices and the great addition of the heavy molding. I was smart to keep one piece of the bresaola to enjoy once we got back. And after the additional 2 months of waiting, it was even better. Though it was quite dry the flavors had improved and intensified beyond expectation! We enjoyed this in the traditional manner, sliced thinly and plated with arugula, parmesan, lemon juice and white truffle oil. It didn't last long! 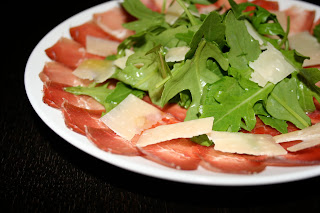 Though our meat and cheese table varied in comparison in size and variety to that of our good friends Monica and Christian, ours most definitely had the homemade and unique qualities we were going for. Monica is of Polish descent and they had a little hut-like stand at their reception that was full of sausages, meat-sticks, potato cakes and other Polish delicacies! For some reason I hadn't even compared the two until now, but I have realized that EVERY wedding should have some version of a meat/cheese/delicacy table.
And for good measure, I wanted to throw out a picture of one of the two pizzas we have been making at home quite a bit. This is the somewhat standard yet quite delicious Arugula and Proscuitto topped pizza, served on a mozzarella and tomato sauce pizza (bought crust). I sliced my homemade ham on the slicer loaned to us by Art from Pleasanthouse fame. The same slicer helped with the bresaola in the above photo! Though not pictured here, we also love to do a pizza with my 'nduja mixed in with the tomato sauce and topped with mozzarella. It's almost like a pepperoni pizza that packs some heat! 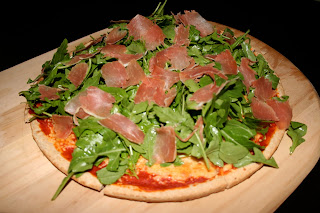