For our last night in Asheville, we decided to stay close to home and have dinner at the Dining Room at the Inn. 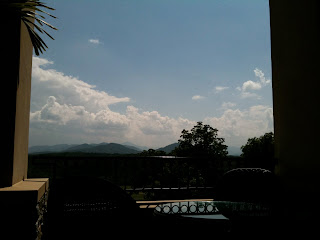 (The view during the pre-dinner cocktail)
We had mentioned to the concierge that we were celebrating our honeymoon, so after a pre-dinner cocktail in the bar (me: gin & tonic, Rebecca: Biltmore champagne), we luckily scored a seat by the window overlooking the lush Blue Ridge Mountains. The menu was local and refined, with plenty of charcuterie to please my palette: bison carpaccio, venison bresaola, duck proscuitto, pancetta. I noticed chorizo on a dish we didn't order, so I asked our server if I could try a tiny bite, which led to a lengthy explanation of my love for and experience with charcuterie.

Before long our first plate arrived. But what is this? We didn't order that! Apparently, the chef was excited about feeding a fellow passionate meat-curer, so he threw together this plate of "proscuittos" with accoutrements. The left was his pork-belly proscuitto that was aged for 23 days. It had a great pork flavor that melted nicely in our mouths. In the middle, the 21 day aged duck proscuitto, had a clean flavor and the texture was perfect, avoiding the sometimes unpleasant chewiness that I've had too often with other duck prosciuttos. Last, but absolutely not least, was the the lamb proscuitto. The lamb flavor was intensified to bring out the deliciousness of the young animal, but not overly concentrated as to give off the impression that it was older than it really was. This is something I have found offensive in other similar attempts. This was hands-down Rebecca's favorite, while I always have a hard time not putting pork-belly at the top of my list. 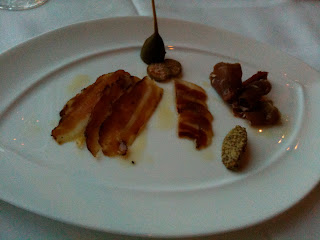 (3 proscuittos in order: pork-belly, duck and lamb)
Speaking of the belly, we had already ordered the warm starter of the house cured pork-belly. Served with orange infused sweet potato puree, pickled ramps and a banyul sauce, it was everything you'd want and much more than you'd expect. It had a great amount of fat, but enough lean to satisfy even Rebecca. As good as it was, the whole dish was absolutely greater than the sum of its parts. The balance of sweet and succulent savory with great acidity from the ramps left you making sure you got a little of everything in each bite.

Onto the bison carpaccio and venison bresaola. Both local, both delicious, and both prepared perfectly. The venison, which was a special that night, seemed a bit leaner and a touch more gamey than the bison. Unlike the chef's plate we received earlier, where the focus was on the meat itself, these latter two came as composed dishes with accompaniments, complete with the perfect balance of acidic, sweet and salty notes. 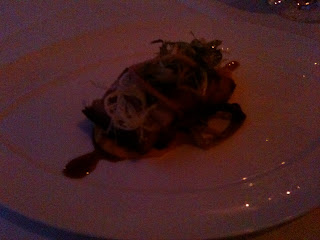 (a dark shot of the house cured bacon)
Overall, I was particularly impressed with how the chef integrated charcuterie into many of the dishes, even when they weren't the main actors. Our chevre salad came with a bit of duck prosciutto and we noticed throughout the menu smatterings of charcuterie tucked into main and side dishes.

I'd like to tell you all the intricate flavors and nuances of each amazing dish. I'd like to even tell you everything we actually ate. But, unfortunately, it's not the focus of my blog and furthermore, we were mesmerized with the room, the view, each other, and the same delicious wine we enjoyed when I proposed to Rebecca. The whole night was a smorgasbord of charcuterie and local flavors.