Luella's is conveniently (for us) located on the same main drag that runs by the front of the Biltmore Estate, just about 2 miles further North. No sweat. We went for lunch on Thursday. The decor is slightly more put together than most BBQ joints, but in a fun way that two (one former) graphic artists enjoyed and appreciated. It was clean, appropriate, but not too busy. We ordered and shared the 3 meat combo option. It came with the choice of 2 sides. We added on some spice rubbed sweet potato chips and washed it all down with some local brews: Highland Brewing Gaelic Ale (left) and the French Broad Brewery Wee Heavy-Er Scotch Ale (right). They had a few sauces in bottles as should every pork pickin' place! 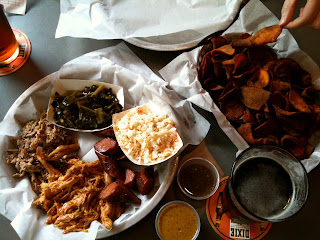 Rebecca found a mustard based sauce with an appropriate amount of added sweetness. She stuck to that one while I used various sauces on the meats (the sweet-mustard, a thin vinegar with some heat sauce and a thicker and tangy-er sauce with what seemed to be a bit of tomato in it) but loved the jalapeno hot sauce with the sweet potato chips (right of photo). Being the type that would almost always order a variety and share, we did just that. We got the 3 meat combo and chose the chopped pork, pulled chicken and smoked andouille sausage. We chose collared greens and a spicy vinegar slaw as sides. The pork had a slight vinegary taste to it which was great. I wasn't sure if it was from a moppng during cooking or if they added some after cooking. But whichever it was, it was tasty just as it was, though I did try some bites with more of the various sauces. The chicken did come in its own tangy sauce, and needed nothing more added to it. It was juicy and tasty and Rebecca loved it even more than I did. I loved the andouille quite a bit, but I am partial to smoked sausages. It was perfectly smokey and quite moist for having been double cooked. In retrospect, we both wish we had room to try some of their ribs. 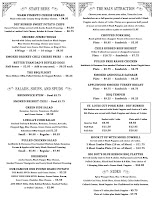 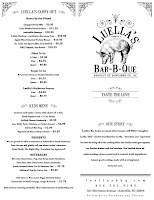 Being from central IL myself, I have only recently fallen in love with braised greens. And the ones being offered up at Luella's are some of the only ones I've tried outside of the Land of Lincoln. They were great with small chunks of porkiness studded throughout. I tend to make mine a bit more acidic with vinegar, but they don't seem to find it as necessary (they use less), and they're doing just fine with their version! Rebecca wanted to try the spicy vinegar slaw. It too was quite tasty. Lucky for me, for someone who isn't to keen on mayonnaise, it was deliciously absent of the slaw killer! Upon finishing our lunch I happily felt that this was easily the best restaurant BBQ I remember eating. 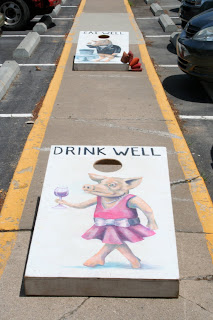 The dining room had filled up a bit throughout our lunch, but it was never as busy as it seemed it should have been for the quality of their product. The were a few sales at the carry-out counter, a pair of older ladies, a very happy family with 2 little girls and few groups of businessmen. Much like I had mentioned about Asheville supporting their local sources, Luella's boasts in their motto that it is a product of Buncombe County. So why isn't this place busier? I think I had seen an older address of their's in a review, so perhaps their move was more recent. Regardless, next time you're anywhere near Asheville with room in your stomach, head over and fill it up with some Luella's. And if you're not up for a local beer, have some Cheer Wine like I did (after my beer), for my first time.
at 3:25 PM