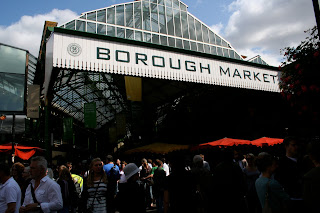 
It was actually a combination of one of Larbo's recipes and another of Len Poli that led to my first recipe. When I make a recipe I do one of two things every time. Mostly, especially with cured/fermented or otherwise sensitive items, I follow a recipe exactly and use it as a building block for my house of knowledge. The other thing I tend to do is find several recipes and pick and choose items/ideas from them and build my own. When I do this I am usually using the ingredients as suggestions and the directions as just that, directions. It was in this latter form that I have created my 'nduja. In part because I am anxious to get this started, in part because I don't want to have to source authentic Calabrian peppers and in part because it's always more fun for me to put my own stamp on something! 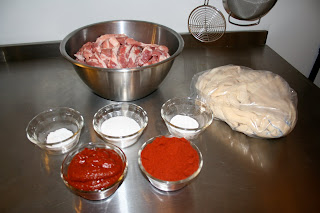 So for this round of n'duja I changed the imported Calabrian Hot Pepper purée to Chipotle purée. And again, instead of trying to order and wait for the same imported sweet peppers, I simply used a sweet paprika. As far as the meat, I stuck to good old pork belly, not too lean or all fat. I also included salt, dextrose powder, and cure #2. I ground it 3 times. First I ground just the belly through the large plate of my Kitchenaid. After that I added in the dry ingredients and they all went for a ride through the small plate of the grinder. They had so much fun I figured I'd send them through one more time. I was happy with the texture at this point. It still had some rather small pieces but wasn't an actual purée, something I was very set on not allowing. I am not sure how much this will change in the next month of drying, but it looked promising. 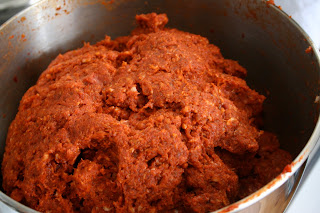 Next I stuffed the farce into some beef middles. I was expecting something a bit bigger when I ordered them. These are about 43mm in diameter on average. The good news is they should lose their weight a little faster! The 5# recipe I did left me with 6 pieces about a foot long averaging 12oz. and 3 smaller test pieces at 6oz. each.

After stuffing them (left) I let them form a pellicule in the fridge overnight (right). This allows the immediate surface moisture to dry up a bit and often gives it a barely tacky touch, to which smoke adheres quite well. The next day I labelled and weighed the sausages and cold smoked them for about 30 minutes. I was distracted slightly by my honey-do list and missed the peak of my hickory smoke blast but I am not worried because I will repeat this smoking step every-other-day for a week, for a total of 4 smokings. I could smoke it daily if I wanted, but with the chipotles it might be overkill! 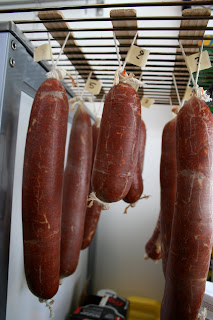