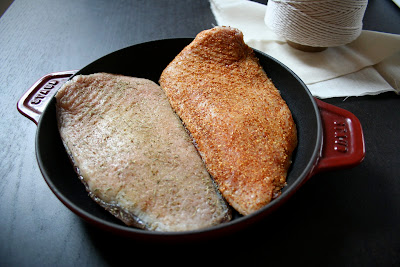 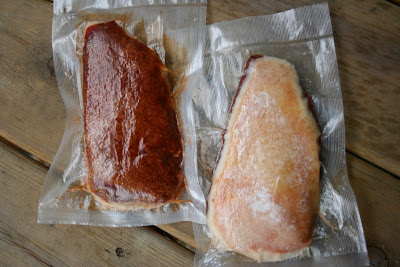 The only two places I had found duck breasts around Chicago had been small frozen ones at Whole Foods or as part of a whole Pekin Duck from Slagel Farms. I called on a colleague, Rob Levitt at Butcher & Larder and he told me he had a nice pair in the case as we spoke. They came from a local farm called Gunthorp Farms. I picked them up and had them trimmed and seasoned the next day. I had to trim around them for neatness and to remove a couple extra flaps of fat*. I decided to try them two different ways. By this I would use the standard salt rub but like I did with the Asian Bacon I would add some more fun floavorings. For this I did a Basque rub with smoked paprika and piment d'esplette. The other version was a Provençal take with garlic powder and herbs de provence. I rubbed the trimmed breasts in half of the mixture I made and vacuum sealed each breast for about a week until they both had firmed up to the touch. Be sure to choose a dry and kinda cool area to hang these. I used our pantry. Places like above the stove/fridge are warm and would be bad. A little ventilation would be nice too for drying purposes. *I rendered out the trimmed fat and kept it in the fridge until I could put it to good use! 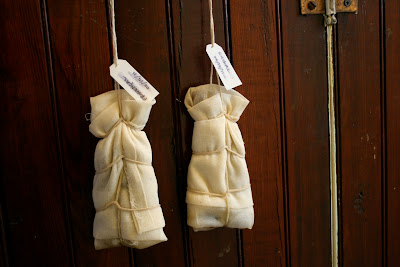 After I took the breasts out of the pouches I rinsed them well and gave them another coating of the spice mixtures, minus anymore salt. I then wrapped them well in cheesecloth and hung them to dry for another week or so. At this point I was waiting for a firmer, but still slightly giving texture. In the past I had waited for too firm of a texture which is why they were too rubbery. You will have to use judgement and eventually some experience to nail this part! 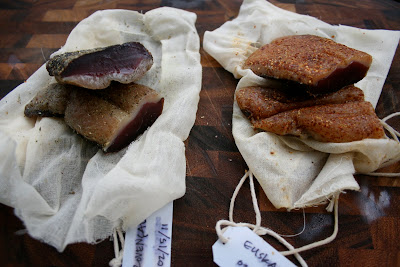 The fat from the breasts was rather thick, but I really like this aspect. That being said you will see that even in ambient room temperatures some of that fat slowly rendered out and was soaked up by the cheesecloth. I had to occasionally wipe it up from below where they hung to dry. But after their hanging time the looked great! You can see some of that extra fat on the cutting-board and how it caused the labels to bleed a bit. 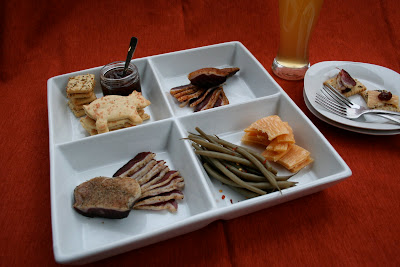 For maximum enjoyment, slice the breasts as this as possible across the short width. If it turns out a bit tough, the thin-ness will help out immensely until you get the curing art down. As I have mentioned in the past, my favorite way to eat any dry-cured meats is pretty much on its own. To enjoy these I made some homemade crackers and put it on a platter with some dilly pickled green beans, some aged gouda and jalepeno-apple jelly. They were both really tasty. The first time I tried them I was leaning towards preferring the Basque (euskal) version. Then oddly, the second time I really enjoyed the Provençal more. This pretty much swapped back-and-forth until it was all gone! You can try pretty much any spice/herb combos you might see fit. Just be sure not too over-salt by adding more salt after the curing phase.
at 10:26 AM