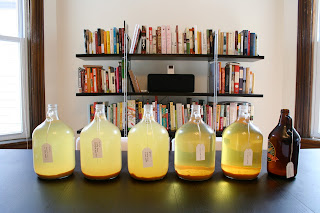 You can see how the solids in the various ciders have settled down to the bottom in the bottles. For my intents and purposes, I chose to leave this behind when bottling. I decided to simply use priming sugar for the carbonation of these ciders. Originally I wanted to try some variations such as honey or even agave, but since there were already so many variations amongst the 6 attempts I decided to see first how these turned out on their own. Each of the gallons gave me ten or eleven bottles of cider. They will stay in the bottles for one more month to finish up their fermentation before I crack any open to see what successes and failures I had.

I will say that the tastings I did at bottling time didn't leave me with a lot of hope for some of these. The two I made from the seedling Farms both have similar qualities to the sauerkraut we made recently. This made sense when I thought how all 6 versions relied mostly on wild yeasts for their fermentation, just like the sauerkrauts we do at home. Also, the 2 I did with a Belgian beer sediment had a funky woody end to them. The first two, also the clearest, left me with the highest hopes, but they were also a little flat in overall flavor. Maybe the carbonation will perk them up. All of them had a bit more sour than I was expecting. Be sure to stay posted about the final tasting in about a month for a side by side comparison!
at 4:25 PM