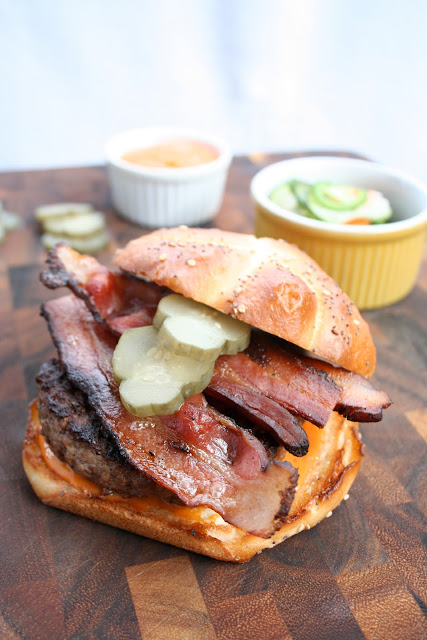 On top of out-doing ourselves with the Asian Jowl, we wanted to come up with a great usage of the bacon that was also fun, interesting and flat-out tasty. So we figured that with so many versions of the good old hamburger going on out there, this would be a great topping for an Asian Burger. 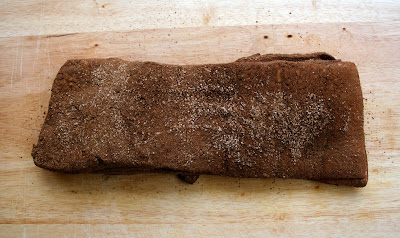 The Charcuterie book recipe calls for three ingredients in its basic dry cure: salt, sugar/dextrose and pink salt. For this variation we changed only one thing in the dry cure itself, the sugar. We chose to split the sugar options into half white sugar and half dark brown sugar. That took care of the curing part, but we wanted to add in some more flavor. Much like what we did with that jowl, we simply added some homemade 5-spice to the cure. Since we weren't cooking it sous-vide this time, we knew the spice had to be big enough during the cure. We went with a nearly 1:1 cure to flavoring ratio, using barely a touch more cure than flavoring. It looked like too much 5-spice, but we knew we wanted that flavor imparted nicely.

After our liberal application of the flavored cure, we placed the belly into a vacuum-sealed bag and placed in it the fridge. It didn't need to be flipped since the bag keeps it in constant contact with the cure and added flavoring, which helps immensely. It cured for 8 days until it showed some firmness throughout but not too much resistance. At that point it was rinsed off and placed back into the fridge for a few hours to form a pellicule. 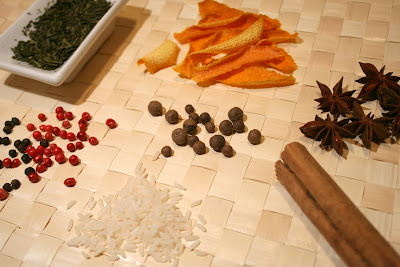 Another thing we wanted to do differently this time was to actually smoke it. Since we wanted a bacon, not just a salted belly, it was a must-do. But did we want to use a wood? Almost immediately I thought it would be a nice touch to keep with the Asian theme and smoke with some tea. After reading about a bit, I came up with a smoke recipe: 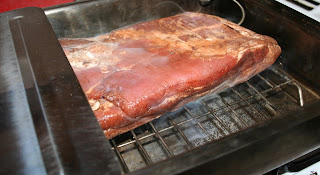 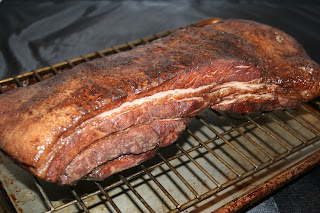 Since we only had one-third of a Slagel Farms belly (usually nicely balanced lean/fat) and the smoke blend was small, we thought that our stove-top smoker would be ideal for this application. I pulsed the smoke blend in the spice mill a few times and spread half of it out over the hot-spot in the smoker. I placed the heat on medium-low. Once the smoke started I placed the belly inside with a probe thermometer. About 5 minutes later smoke began to bellow. After about 30 minutes I refreshed the smoke blend and flipped over the belly. About another 30 minutes later I added around 1 T of Alder smoke flakes just to add a hint of wood smoke and by the time it had burned out the internal temperature hit my target of 155˚F. It came out and immediately went into the fridge again. 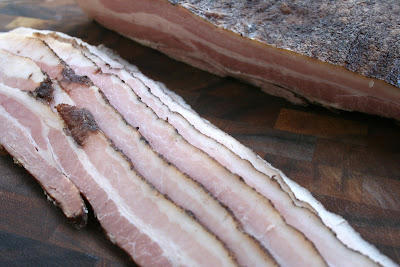 The next day we took it out and sliced it. That was when the tasty part began! We grabbed some Slagel Farms ground beef, a couple seeded rolls from Whole Foods, I whipped up some Sambal Oelek aioli (1 egg yolk, 3/4 C oil, 2 T Sambal Oelek, 1 clove garlic and 1/2 t Dijon) and sliced up the last of our miso pickled cucumbers our friend Steve gave us. We also made up a quick cucumber salad as a side. All this added up to a juicy and flavorful Asian inspired burger. The bacon tasted so nice. The 5-spice was perfectly present without being overbearing. The smokiness, which had worried me the night before when smoking was actually perfect. It wasn't harsh and you could even pick up on some of the spices in the smoke blend. It was quite different from the smoother and more familiar wood smoke but this new twist definitely gives you something to think about next time you want to make some bacon at home.
at 10:47 AM