Getting cheeky, or What I did with 5 jowls 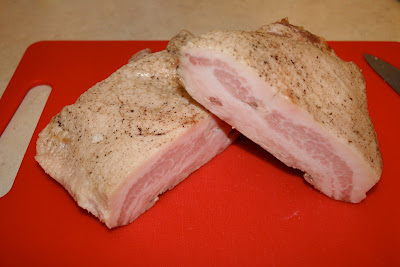 On a recent trip to the farm and processing plant of Slagel Family Farms and Slagel Family Meats, I picked up a bag of jowls: five in all. During the drive back I thought about my plan of attack. I hadn't done much since the 'nduja and bresaola I started long before the wedding, so I had a few ideas, to say the least. At some point I realized that I was in no way committed to a single idea. Do I need 5 whole cheeks of any one style anyway?


My ideas on the road started to turn into solid plans. After mentally running through my stock of herbs and spices, I decided to use a different internationally inspired cure for each jowl: Asian, Spanish, Italian, French and American. And I would smoke a few at the end. 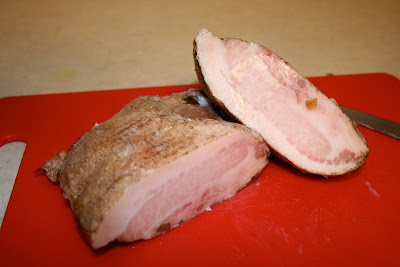 (Asian Jowl after cooking)
I used Ruhlman/Polcyn's basic dry cure of kosher salt, sugar and pink salt (cure #1) along with the following ingredient list for each style:


The final ratio of flavorings to cure was about 9:10 (a little more cure than flavor) so I made sure to add the mixture liberally. Then I vacuum packed them and left them to cure in the fridge for about nine days. Since some of the jowls were thicker, the extra couple days were needed but didn't adversely affect the smaller ones. If you aren't sure of how long to cure this type of meat, check out the bacon post for explanation. 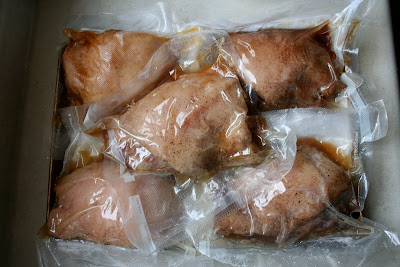 (After 9 days curing in a sous-vide environment)
Depending on what you have available, there are a few options to cook these. I could have hot smoked them all at 155˚ and basically have spiced and herbed jowl bacon. I could have cooked them sous-vide at 155˚ for about 48hrs (borrowing a friend's circulator). I could have let the cure be enough to cook and air-dried them. I could have ... ok, you get the idea.

I decided, instead, to give them a good rinse in cold water and re-vacuum-pack them. I added nothing to any of the bags except more liqueur in the French and more syrup in the American. I did toss around the idea of using more of the cure/spice mix in the cooking bag. I chose not to for a couple reasons: after a week in a salt cure adding more salt might result in it being over-salty; too much nitrate/nitrite might not really be that necessary; and not doing so would help me better gage the flavor levels of the original cure mixes. I knew the fat and juices that rendered out in the beginning would be more than enough to keep the meat moist during the sous-vide cooking. As for the cooking part I chose my home sous-vide method of bringing the pot of water to a boil, drop in the bags of protein and place the pot into my pre-heated 170˚ oven. I left them in for 48hrs. I know the normal bacon temp reaches 155˚ when smoking, but I can't set my oven below 170˚ and since I didn't want to smoke all five, this made more sense.

Once they came out of the bath I immediately pressed them with plenty of weight and let them cool in the fridge overnight. This helps with the texture of belly and jowl with the alternating layers of fat and lean. At the end I wanted to give some smoke to the American and Spanish versions so I threw them in the cold smoker with some hickory and mesquite and hit them strong for an hour. To prep for the smoke I let them hang in the fridge to form the pellicule for a couple hours before smoking them. 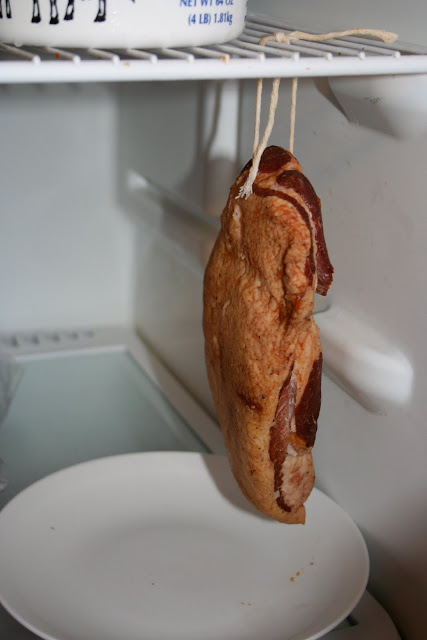 As you can see, there is a higher concentration of fat here vs. in a belly where there is obvious fat/lean/fat layering. Even the lean layers of these cheeks have some fat. This is because of the different make-up of the jowls. And with my slow and low sous-vide method of cooking, the texture is even more enticing. Now the fun part begins. How I am going to use 5 different versions of cured jowls?
at 6:57 PM