Believe it or not, I've made something not meaty. I will admit I do it fairly regularly. But since this is a preserve and it's done in an artisanal way, I thought it merited being shared with you guys. I love preserving. I know it's not very manly, but it helps offset all the extra testosterone built up from my smoking and braising! In my past posts I have talked a lot about my growing up and why I like meat so much. But I haven't yet talked about my paternal grandfather, Grampa Joe. We was an airplane mechanic in the Army Air Corps, was part of The Civilian Conservation Corps under FDR's New Deal, and even later worked for the postal system with my maternal grandfather. But two of the biggest things I remember him for now, and always will, are his hobbies. He was an avid carpenter/handy man. He is the one I credit for my ability to build, fix and create. He had a huge "wood shed" with all the necessary power-tools and he was always more than happy to take me out there and show me how to do something. I would look forward to having a reason to have him teach me a different technique or use a tool I had not yet seen. I took advantage of this when ever I had the chance.

But it was his other hobby that I think most other people cherish most in their memories. He was an avid gardener. Their property on the west side of town was over an acre, and at one point it seemed that half of it was a garden. I imagine his green thumb came from his time with the CCC. These young men made our National Parks what they are today, beautiful, safe and accessible. And this definitely carried over into his later years. Unfortunately for me, I was never really into gardening or eating vegetables. I remember my cousin would come over and head straight to the tomato plants, grab one, come inside and devour it with a little salt. I preferred to use the garden as a back drop to my target practice with grampa's pellet gun he'd let me use. As he grew older the garden grew smaller and the dust in the tool shed got thicker. 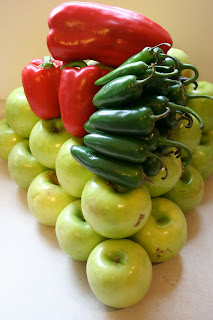 But as I have mentioned in the past, I have since learned how to make vegetables so much more enjoyable than anyone was showing me as a child. So much so that now I dream of having a garden someday soon. In my mind it would be a french potager, a seasonal garden that is planned out to be able to plant and change the items according to their season to get the most for your space and time. But until then, I just keep practicing making the most of mother nature's gifts for us. Preserving has been a favorite of mine. Making an abundant product to last year-round so it doesn't waste, and to taste delicious in the middle of it's "off-season!" So when I went to the grocery store a couple months ago and saw all the granny smith apples, I knew it was time for some jalepeno jelly.

Grab yourself the following:

the equivalent of 6 C of canning jars, already properly processed according to your local needs.

1. Chop the apples up into medium sized chunks (1/2" - 3/4"), including the core and skin (the pectin that causes the "jellification" come from the cores). Place them in a non-reactive pot with the chopped up serranos and bell peppers. Cover it all with the vinegar and water and cook over medium heat until the apples are falling apart. If the liquid doesn't cover the fruit after it starts cooking and with regular stirring, you can add some water, but this shouldn't be needed too often 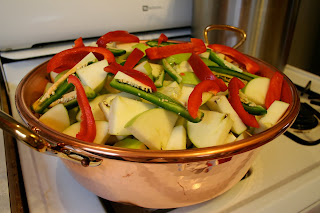 2. Once everything is tender smash it all up a bit more with a potato masher or large spoon. 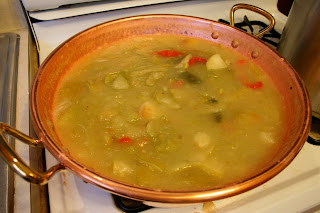 3. Place the mashed goods into a finer-mesh colander and allow it to release it's liquids. Resist the temptation to force it through manually or else it will cloud up your jelly. This can last several hours.

4. Measure the juice and put it into a non-reactive pot. Add about 2/3 C of sugar for every cup of juice. For a sweeter version you can add up to a cup per cup, but it's pretty sweet. 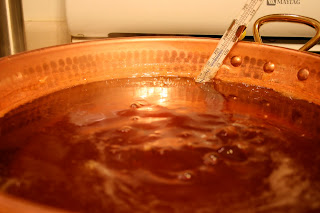 5. Bring this mixture to a soft boil (about 220˚) and skim the scum off the top as needed. Place a plate in your freezer. Reduce by about 1/3.

6. Seed and cut your jalapeno peppers into a small dice of about 1/8" square as it reduces.

8. Take 1 cup of the jelly and place it in a small pot with the jalapenos and cook over medium heat for about 2 minutes. This helps keep the jalapeno juices from diluting the mixture at the top of the jars after processing. 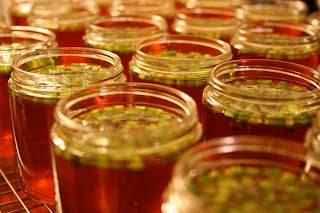 9. Evenly distribute the diced jalapeno mixture into the bottom of the jars. Pour the jelly into the jars to just within 1/4" of the top. Process these according to your local standards (depending on elevation, etc).

This stuff is best with a nice triple cream cheese on a cracker. It's great on crackers, biscuits and even a ham sandwich. Store it in a cool place and it should last for months if you can leave it alone that long! Keep it in the fridge once you open it,
at 12:28 PM

Email ThisBlogThis!Share to TwitterShare to FacebookShare to Pinterest
Labels: preserves