As part of our culinary offerings for our wedding in May, I am getting to do a cheese and charcuterie table. I have to admit that I am a bit pressed for time in preparing the things I am offering, so I have to take the 6 week time-frame into account. I do think that this might be just enough time for a decent 'nduja, a quick version. You might have read about the lack of success with my first attempt. It was far from notable with it having over-dried and having a bizarre graininess. But as I eluded to in that last post, I have a couple fixes that I am banking on working out. Most importantly, my friends Emily and Henning (the same couple for whom I prepared the pulled shoulder) have recently moved. It just so happens that they have a room seemingly ideal for some charcuterie drying! And being a meat lover, Henning is happily accepting my offer of products in payment for his space and occasional tending to the goods (checking temperature, weight and refilling humidifier)!

Instead of beating a dead horse, I'll quickly remind you what wasn't right with the last batch: dry, grainy and it was rather mildly-porky in taste. So I changed the meat composition, peppers, added a controlled drying process, improved the pork quality and fermented this batch. And thus far they are looking much better, though I felt the last batch held good potential at the start. Since I wanted a large enough batch to give to friends as well as offer at the wedding, I ended up with a 24 pound batch, that should yield around 16 pounds in final product! The composition of this batch is: 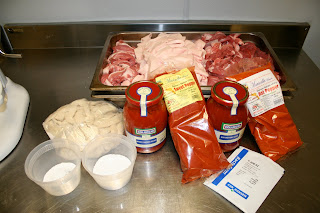 These percentages are of the total weight of the meat products. The total pepper percentage might seem high, but since the puree is about half the concentration of the powder it is actually closer to 20%. I went with a fast acting starter culture (F-RM-52) since my drying time is limited before the wedding. I could have added some dextrose the help increase the fermentation, but I didn't want it too sour, so I didn't go for it this time. The pork came from Slagel, the peppers from Sausage Debauchery and the Bactoferm™, curing salt and casings from Butcher & Packer.

I ground the meat (I am a supporter of the "long strip" school that allows the meat to feed itself into the grinder) and fatback using the usual rules of chilling everything as cold as you can (meat, grinder, bowls, etc). I thought about chilling the pepper puree but realized since this wasn't going back in a fridge, it might be overkill. I am lucky to work in a professional, large kitchen. I was able to bring everything in and use the commercial space with much more ease than at home. I had access to a huge ice machine, an enormous stand mixer for mixing the farce, a commercial KitchenAid grinder (a bit faster than the one at home) and a 10# Dick brand sausage stuffer. I am also very lucky to have a fiancée who loves being in the kitchen. Rebecca was my sous-chef for all of this. 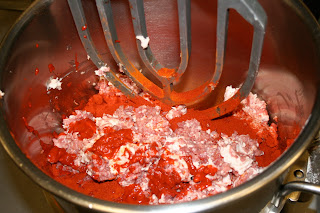 After grinding the protein/fat, I chilled it back down. I then assembled the stand mixer and alternated adding the ground proteins, the various forms of peppers, the salts and the culture (it required being mixed with 2% of the meat's weight in distilled water for 30 minutes prior). It mixed until everything seemed uniformly mixed, less than 3 minutes! 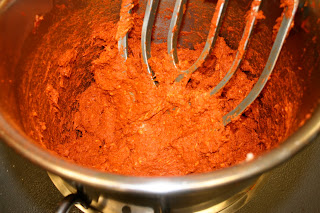 Then in 3 batches we were able to stuff the sausages into a medium sized (40-45mm) beef middle casing. I did these in roughly foot-long links, only tying the beginning and end of each section. It yielded roughly 32 pieces between 8-14 oz. each, depending on the varying width of the casing. 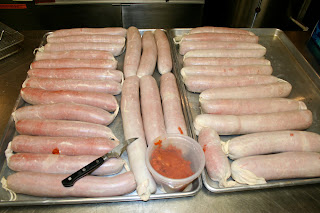 After this we went home to finish the more repetitious task of tying them off. At home I was able to better size these. I would tie off the open end and re-squeeze everything to an appropriate length. The tie was something new for me. The last batch left me worrying about the tie slipping off after all the weight was lost. I found a description of a butterfly process of tying that I think will fix this. I am not certain that I understood the text description, but here is how I tied them:

First I cut a small (3/4") split in the open end. I then slipped the two wings through the two opening of the the knot you see to the left.

This is how it should look. It is important that the lose strings are actually behind the loop in this step.

Pull these taught around the end and back under in the same direction they were headed.

Bring the twine back over the top and do a simple knot like the first step in tying your shoe.

Tie another knot in the opposite direction, leaving you with a double knot, that is tied behind the first loop, away from the end. And there you have it. This should allow for drying of the casing without allowing the slippage of the knot off the sausage end.

After this they all went into my oven. I have placed a cord with a lightbulb (100w) on it's end into the lower broiler. This raises the internal temperature to 83˚f, the median temperature (65˚ min. and 100˚ max) for this starter culture. I switch the racks inside so that the slight variations in temperature at different internal levels is not over-fermenting the top while it under-ferments the bottom. I also included large container of water to allow for adequate humidity at this stage, though it isn't controlled tightly. They will stay in here for 4 days. The pH at this point was about 5.4, and I'll check it 24 hours to be sure it dropped below 5, the safe level. 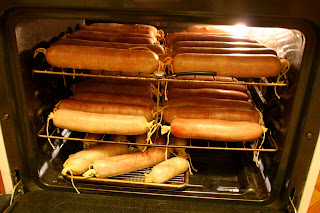