Since you are on a blog that focuses on charcuterie and other meaty items, it is likely that you've been around the web once or twice reading protein enriched writings. And it is also probably safe to assume that since you are media savvy and like smart-alec cooks telling stories that you are at least familiar with Anthony Bourdain. And since you likely have at one point been entertained by his musings, you have probably read his thoughts on Chef Fergus Henderson and that little restaurant he runs across the pond, St John. Well I certainly had when I was living in Toulouse, France and decided to be the ultimate tourist and visit Dublin for St. Patrick's Day. But being on a budget I had to go about it in an affordable way, and by affordable I mean budget airlines and cheap lodging. The budget airline took me from Toulouse to Dublin, via London. But the connecting flight was the following day each way. So I found myself having some time to kill in a city I had yet to visit, except of course, during lay-overs. 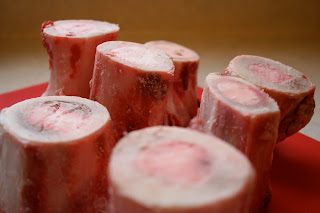 But after having read so much praise from Bourdain and so many other lesser known food-writers out there, I was very eager to give St John my sparse coin. After reading nothing but positive reviews and deciding that I could almost afford a lunch there after the horrible exchange rate, I set out that morning to eat nose to tail. And of course I had to have the oft written about signature starter of Roasted Bone Marrow with Parsley Salad. I had never eaten bone marrow, and usually avoided that part of the steaks that included a slice of bone when younger. But the descriptions I had been reading tantalized my taste buds.


My lunch that day was fantastic. Of course I started with the marrow, then had a braised oxtail main course and even had room for the eccles cake and lancashire cheese. I also picked up the UK version of his book Nose to Tail Eating

. I was unaware however that the entire time I was dining, the chef was too, behind me with his father. Upon learning this I asked if it would be bothersome to meet the man. The waitress informed me he was OK with it and I spoke briefly with him and his father. I told him I appreciated all the French wines he offered from the region I was living in France, his father told me a story from his short time he visited Illinois and Mr. Henderson even ended up sending over a digestif before I headed out after he signed my copy of his book. 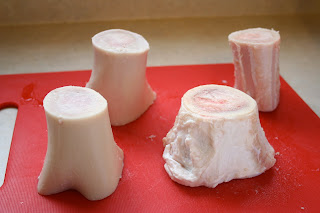 When I got back to France I started noticing how easy it was to find veal marrow bones at the various marchés I frequented. So I began enjoying this fabulous dish in my tiny apartment kitchen somewhat regularly. After getting back to the US and moving to Chicago I was occasionally surprised by seeing some version of a roasted marrow dish pop up on a restaurant menu. There was even one at my current job when we first opened. After trying a couple sources I found a good and reliable product from Slagel Family Farms downstate. I made this at home for the first time in the US for a New Year's Day dinner last year and I think it was officially the favorite dish of the night. And the best part is, it's not only richly delicious, but fairly simple to create at home. And at under $3/lb., it's quite affordable.

If you aren't sure where to find the bones, try a real butcher, or even an ethnic meat purveyor. They are available as beef marrow bones or occasionally as veal marrow bones. It is important to be sure how they are cut though. Most places sell these for use in stocks so they are cut in large pieces and often include a joint section. I use cross-cut pieces 3-4" tall. Some places I have eaten use a split-cut bone, almost like a canoe that completely exposes the marrow but is 4-5" long. 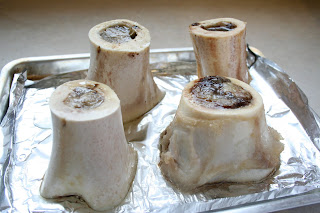 When I get these home the first thing I do is soak them a day or two in a salt water solution. Not too salty (it should taste like the sea), but enough salt to help pull out the blood. You can see the difference in the first photo and the second photo. In the second photo I have a pair of bones that have been cleaned after the soak on the left and a pair uncleaned after the soak on the right. The uncleaned are noticeably whiter than those in the first photo and the cleaned ones are even more white. I did some cleaned and others not cleaned to show you the difference in appearance after roasting. Cleaned or not, it is your preference as cleaning these can be a pain in the butt, even after the soaking. You pretty much use the back side of a knife and scrape the bones bare.

I roast these for about 20 -30 minutes at 400˚. It is important to keep an eye on them. It is entirely possible to actually render all the delicious marrow out of the bone and onto your roasting tray. This can happen to skinnier pieces as the fatter ones are still not yet done, so be mindful of this. You want the center of the marrow to be soft and spreadable, but not liquified. Don't be afraid to scoop some out to check until you've gained the experience to make a proper judgement without doing so. 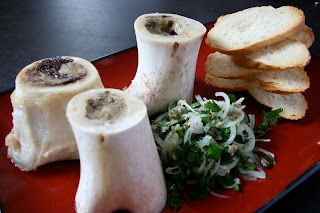 While these are roasting a grab a couple shallots and slice them thinly. I pick about half a cup of parsley leaves and rough chop them. And I rough chop about 2 tablespoons of capers. A simple lemon juice and olive oil vinaigrette is used to dress all these things when I mix them together and season it with salt and pepper. I slice some baguette rounds and throw them in the oven as the bones finish roasting. And a small salt dish with some coarse salt of your liking (Malden here) is all you need. Well, almost. You will need a slightly "smaller than most" knife to get inside the bones to get every last morsel of goodness out and to spread it on the toast. A little salad and a sprinkling of salt and you have a delicious snack or start to a great meal!

* a trick I learned early on when I did accidentally render out too much from the bones was that you can actually save that liquid in the roasting pan and let it cool slightly (room temp.) and spread it on just like the marrow left in the bones.
at 1:34 PM