Like most Americans, I am a mutt, a crossbreed, a cornucopia of mostly European bloodlines. But I can say that from both sides of my family I have a good amount of Irish, Scotch-Irish, even Kentucky Irish (one of the many sources for the term Rednecks). Throw in some French, German and Crow Indian and you have the whole me. My middle name is Patrick and my family name starts with a Mc as if the above didn't help or my pasty white skin and red-headed/freckled past wasn't enough to give me a good reason to prepare the Mid-March Feast of Corned Beef. But you don't have to walk with a shillelagh or kiss the Blarney Stone to make this treat at home from scratch. It does take a week from start to finish though, so be sure to plan ahead if you want this for the big "everybody's got some Irish in 'em" day.

I personally used a sous-vide method and will describe that, but I will also let you know what to do if you don't have a vacuum sealer since a decent zip-lock will work too. But first you'll need the following:

5 # Beef Brisket (you can go larger or smaller, but adjust the amount of spices accordingly) 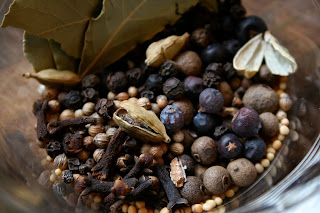 One the first day you'll need to create the brine. Assemble all the items from the second section above. Put all of these items into a pot with 2 quarts of water and bring to a boil. Once it reaches a boil allow it to steep for about 30 minutes. After the 30 minutes you can add in 2 more quarts of ice water to cool it down. Once the brine has cooled completely place the brisket into a container that will allow it to be submerged by the brine. I used a roasting pan for my long flat brisket. Pour the brine over the brisket (this brisket was again from Slagel Family Farm), making sure it is completely covered. If not, you can add a little more cold water. I used a lid from a pot to keep the brisket submerged as it tried to float to the top. Cover the container and place it in the fridge for 5 days, turning it over every day or two. 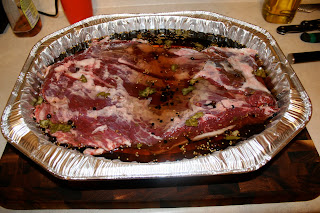 After its brining period, you want to remove the brisket and set it aside. First you need to strain all the pickling spices out of the brine by draining the brine through a strainer fine enough to catch the spices. Reserve the spices and rinse the brisket three times in a cold change of water. Since my brisket was so large, I split it into two pieces and put each piece into a separate Foodsaver bag. I then split the spices that I strained into the two bags. I added about a half of an ice tray of ice ice cubes to each bag and sealed them. I used ice because the Foodsaver unit would actually suck plain water out if I had simply added water, but it works fine if the water is in solid ice form. If you are going to use the zip-lock method here, you can simply use water, but get out as much air as you can when closing the bag, it is a very important step. Next I got a large pot and placed the bags inside. I then filled the pot with water and placed it on the stove covered. I turned the oven to 170˚, my lowest possible setting. I heated the pot with the brisket bags on the stove until it just started to boil, only a few bubbles visible. I then placed it in the oven. I let it cook sous-vide for 48 hours. My oven tends to turn itself off after a few hours so I would regularly check it and reset it so this wouldn't happen. 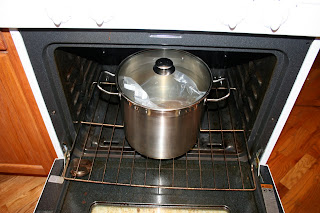 After the long 48 hours had passed, I had to start thinking about the 2 different preparations. The first was the Corned Beef and Cabbage dish. I seared off some white cabbage (a quarter cabbage per person) that I had cut into 8 wedges, some russet potatoes and some fat carrot slices. I did this over high heat in a cast iron skillet with a little corn oil. I then strained the hot juices from the brisket bag through a strainer again, this time discarding the spices. At this point you need to check the saltiness of the liquid and make any adjustments. If it is salty, you will need to add water to it so your vegetables aren't over salted. This liquid then went into the cast iron skillet with the seared veggies, just over half the depth of the veggies, not to cover. I simmered them for about 20 minutes, turning half way through, until all the veggies were done. If something is finished before the rest, take them out so they don't over cook. 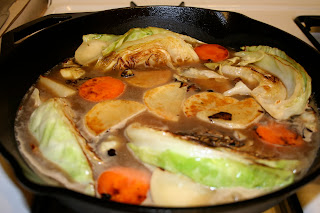 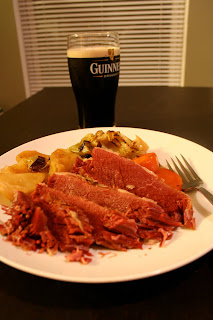 The next preparation was the sliced corned beef for sandwiches. Go back to point where I took the sous-vide bags out of the oven. I took the more solid end of the brisket and placed it, still in the bag, onto a small tray. I then filled a wide flat-bottomed container with cold water and placed it onto the bag o' brisket. It immediately went into the fridge until the next day. This is done to press the very tender brisket into a more firm shape so it can be sliced thin.

The next day I took it to work and threw it on the slicer. This can easily be done at home to what ever thickness you prefer with a simply sharp knife. I like uniformity and speed, so I cheated! I bought some dark rye and some english cloth-bound cheddar to make some sandwiches. I lightly buttered the rye and put some sliced cheddar onto each piece. I quickly heated up the corned beef in a sauté pan. I then put the meat onto the bread and toasted the whole thing to a crispy perfection, obviously flipping half-way through. I grabbed a homemade pickle spear and stuffed myself silly! 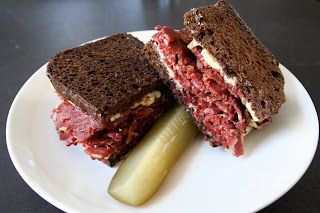 What do you do with all that scrap if there is some left over after the first two preparations? Hash it is! Chop up all the scraps into a medium sized dice and add it to some diced potatoes and onions that you have browned off in a skillet/sauté pan. Season it up with some salt and pepper and you are sure to not have a sign of anything corned left in your kitchen, unless you insist upon talking about your green clovers, blue diamonds and purple horseshoes in a bad Irish accent, but I guess that's more corny than corned!
at 12:33 PM