One of the most common things I hear from the few vegetarian friends I have is that of all the meaty deliciousness they left behind, it's bacon that they miss the most. I can see this. I am not so understanding of those meat eaters out there who claim to enjoy non-pork bacon though. Turkey bacon in particular. I understand curing something besides pork, but slicing it thin and calling it bacon doesn't do it for me. I have had, and enjoyed, beef fry, a kosher beef preparation very similar to bacon, but at least they aren't calling it beef bacon. I have read about lamb bacon and again question the use of the name. But who am I to say what other people can and can't call their creations. I just know that I would look at it with discern if anything but pork carried the sacred name (I know, sacred, a bit strong). But since I am sure you've already read my introduction post, you know how I feel about my bacon. It was one of the few meats I had with some regularity as a child, and will never want to live without it.

So that being said should make it no surprise that I enjoy making my own bacon at home. I can control the quality of the pork, the thickness of the slices (thin, thick, lardon slices), the additional flavorings (maple, black pepper, etc), the amount of smoke and type of smoke used (applewood, hickory, etc) and if I want to cold smoke it or hot smoke it.
I use the basic dry cure from the Charcuterie

book every time, the dextrose version. It calls for curing with the skin on, but it isn't imperative as long as you don't over cure it since the skin slows down the cure a bit. You can tell best by the feel of the firmness. It should feel like a medium well done steak when the bacon has reached the proper firmness. Starting to get somewhat firm, but not so firm that it doesn't give when you pick it up. As usual, I cure mine in a Foodsaver bag so I don't have to worry about flipping it regularly. I added some fresh ground black pepper to this batch. As everything of late, I purchased my belly from Slagel Family Farms and picked it up from Mado here in Chicago. This four pound piece cured for eight days. After the cure I took it out of the bag and rinsed it under cold water, but not rubbing it as to knock off the pepper. I then set it on a rack for good circulation and let it rest in the fridge overnight to form a pellicule for better smoke adhesion. 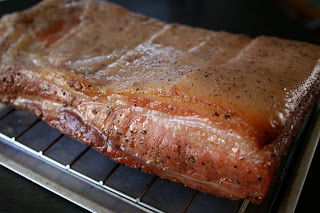 I did a fully cooked hot smoke for this round. I used a light (short) smoke with hickory in my gas smoker at 400˚. It was about 45 minutes until the internal temperature reached 145˚. The smoke blast lasted about 20-30 minutes and was fairly light. I did this so that the purity of the pork flavor could shine through more than the smoke on this batch, and it worked perfectly. As soon as it came out of the smoker it went back on the (cleaned) rack and back into the fridge overnight. Again, it went in to work with me and hit the slicer for an even thick slice. 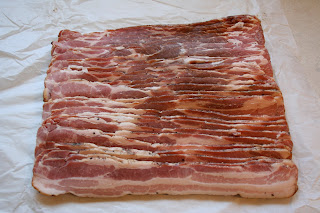 The dextrose in this cure tends to cause a darker ring around the edge of the bacon when it cooks. I like this because it gets crispy without getting bitter. You do have to be careful of this though because it will get bitter if it is burned. Cook this on a medium heat and resist the temptation to turn the heat up. This belly had a great fat distribution and left the bacon tender even with a good amount of fat rendered in the pan, which of course you save for later use! 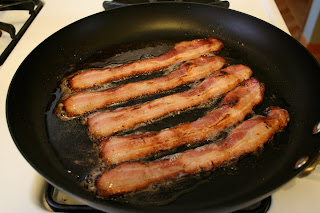 In the past I have done a cold smoke method both with my indoor stovetop smoker and my outdoor gas smoker. Both of which I simply place the bacon over a tray of ice and put it in just as the smoke blast hits its peak. I keep the internal temperature below 80˚ and like the hot smoke, get it straight into the fridge after it comes out of the smoker. You can see the difference in appearance when comparing the above sliced photo (hot smoked) with the photo below (cold smoked). 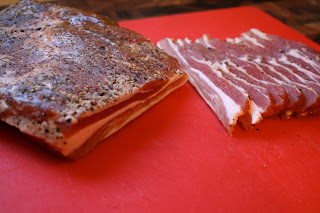 This is another recipe you can personalize all you want. You can change up the sweetener: brown sugar, molasses, cane sugar, etc. You can add herbs and /or seasonings. You can change the wood you smoke with: apple, cherry, oak, walnut, hickory, etc. You can adjust the level of smoke and the method (hot or cold). The only limits are your imagination and understanding of the processes.
at 12:59 PM