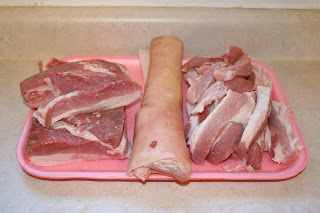 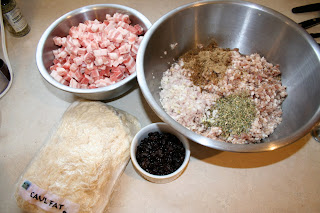 The next day I cold-smoked the loin with some oak and threw it back in the fridge. I then removed the skin from the belly (which I saved for rinds later), cut half of the remaining 2# into strips to feed into the grinder (small grind), and left the other 2# in large pieces and threw it in the freezer to set a bit. I then ground the strips of pork. Once the large pieces in the freezer had started to set I took it out and cut it into a medium dice, nice and uniform for aesthetics. I then mixed the two belly products, some Rye macerated currants, salt, pink salt (#1), black pepper, herbs de provence, paté spice, white wine, more Templeton Rye, garlic and shallots. It all then went back into the fridge. I try to buy belly with a good amount of both fat and meat so I don't have to add any additional fat back. 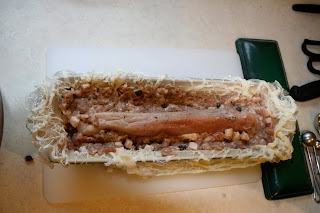 I then lined my terrine with plastic wrap and then caul fat. Next I filled the terrine with the farce, about 1/3 of the way, being sure to fill in the corners of the terrine and pack it well. Once it was 1/3 full I took the tenderloin out, patted it dry and laid it down the center of the terrine. I then filled in the sides and end around the tenderloin, again being sure to fill in all spaces. Once the tenderloin was covered I continued to fill the terrine OVER the top. It almost looked like it would end up looking like a muffin popping over the top. This is an actual desired effect for my terrines, and it also allows room for shrinkage from fat and moisture lost in the cooking. This left me with a little extra farce so I made 2 little bonus patés that you see in the image here. 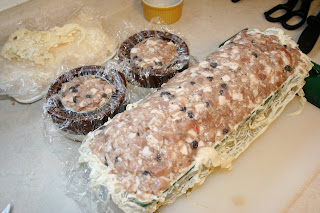 My oven was preheated to 300˚. I then closed the caul fat over the top of the paté firmly, but not enough to tear it. I closed the plastic wrap over that and then wrapped the whole terrine in heavy duty aluminum with the closure at the top. The terrine went into a roasting pan and into the oven. I then filled the roasting pan with hot water to about 2/3 the way up the side of the terrine. I inserted a probe thermometer into the very center of the paté and closed the oven door. 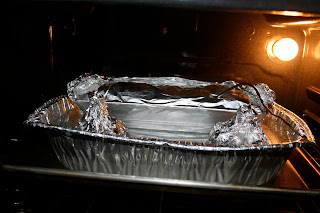 Around 2 hours later it had reached the desired temperature of 152˚. It came out of the oven and out of the foil. With a knife I pierced the plastic wrap in each corner and then placed a cardboard cut-out the size of the terrine (wrapped in plastic) with some canned foods and more weight on top to help form a firm paté. I left it to press and cool in the refrigerator until the next day. I then unwrapped it and sliced it right down the middle to admire its beauty! 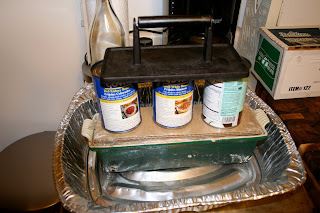 An interesting note is that once I cut it open I noticed an unusual ring in the tenderloin. Some might guess it a smoke ring but I am certain that it was the reaction of the raw loin being next to the farce that contained pink salt. The pink salt from the farce seems to have absorbed into the loin during cooking. The center of the loin has the color you would expect from being fully cooked, while the outer ring is still rosy. For the dinner we served it sliced and plated with some crusty sourdough bread, dilly beans and moutarde de Banyuls. 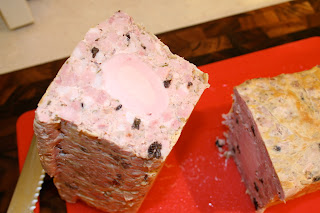