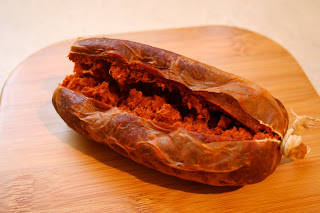 When I sliced it open and took that first whiff it was smokey, peppery and a little porky. I knew right away that the fat content was too low. While it wasn't firm in any way, it also wasn't spreadable. I peeled off the casing, which was pretty easy, and took a bite. Not very porky. This is likely because of the fact I used "commodity" pork from the carniceria and because it hasn't had enough time to develop its flavors through aging. The heat took a second to hit me, but it did on the back of the palate after a few seconds. It wasn't as hot as I had expected though. Another aspect that wasn't as prevalent past the first smell was the smoke. I thought that with the chipotle purée and 4 smoke sessions it might be too smokey, but it was only barely smokey. And the last thing that disappointed me was the occasional "sandiness" from what I am assuming was the paprika powder. I thought I had mixed everything well, but maybe I hadn't. I guess it sounds like this was bad, but it wasn't. It is still quite tasty, but just not as I had expected and aimed for. I am going to let these continue their affinage and have some every now and then. But in the meantime, I am going to get started on the next batch, with some changes!

As for the texture, to get a more spreadable version and also a more consistent product I think I will use a less fatty muscle (shoulder perhaps) and add some blanched fat back so I can maintain a more consistent ratio. And hopefully I can get it better on the next try. I am thinking about a 2:1 muscle to fat ratio. I would also like to get ahold of some better quality pork that will give a better pork flavor. There is still some hope for this in my first batch, but time will tell. As for the heat and sandiness, I have a one time fix for both. I have ordered and received some authentic calabrian pepper sauces from Scott at the sausage debauchery on his eBay store. I also ordered the powdered versions, which I will try in another batch after a long mixing time to avoid said sandiness. And as far as the smoke, I will not use the chipotles (I have the real thing now!) and do the 7 days of smoking as proscribed by Len Poli. I kinda really love smoking, so this might be the most fun part of this whole process! But before I do any of this over again, I must get a drying chamber put together. I lost too much weight too fast with this and the bresaola, not allowing good aging. This can also wreak havoc on fermented sausages. Which reminds me, I'd also like to add some starter culture (induces fermentation) into this next batch. It lacks at this point any acidity. Depending on what size casings I go with and my chamber, I will use bactoferm F-RM-52 (fast, higher acidity, what I should have used here), T-SPX (light acidity, shorter aging) or F-LC (acidity depends greatly on fermentation temp.).

Last night I used the first sausage to make a great pizza sauce. I roasted some red bell peppers and puréed them with the remaining sausage and used this as my sauce instead of a tomato sauce. It was pretty damn good, some heat, a touch of smoke and lots of peppery goodness!
at 11:57 AM