So last night, to celebrate our 2nd anniversary of dating, my fiancée and I thought it would be a perfect choice. So we shot over to 500 N. Michigan Ave. We had been told by someone else that it was in a business building, but even when walking into the lobby of that address, it almost seemed like we made a mistake. The concierge of the building quickly assured us we were right and sent us down the hall on the left. Through a wooden door with a large Purple Pig logo'ed glass pane, which reminded me of doors in my old junior high. We had found the spot.

The place wasn't as big I had imagined, but it is well designed and almost cozy. Light colored woodwork, subway tiles, decorative tiles, communal high-top tables, some shorter tables and a counter wrapping around the open kitchen that occupies the northwest corner. We were quickly sat, given an option of a high-top or not, and opted for the first. We were sat next to a family that was having such a good time that they were yelling to each other. It wasn't loud in the restaurant, though they seemed to find it necessary to yell. You could tell they were loving it too! Our server Kyle assured us they had just ordered desserts, so all was good.

I quickly decided that I would be willing to eat just about everything on the menu. And being that I have a tendency to over-order, I left the ordering to my lovely date. I may have helped with a suggestion or two, but she did quite well. We had the pork fried almonds with rosemary and garlic to start. They were delicious skin on almonds that were slowly cooked in lard with lots of whole garlic cloves, rosemary and maybe even some thyme. She was surprised by the softer texture of the nuts. It was perfect to enjoy with our drinks, a glass of Cava for the lady and some Dopplebock for myself.

Next up was the rapini with whipped ricotta. It was good. A creamy ricotta with lemon over some nicely cooked rapini with just a hint of that delicious bitterness. Just a pinch of salt would have made this a better. We followed that with some Catalonian Fuet, an air-dried Spanish sausage with a perfect ratio of fat to meat that came out sliced on a small wooden plate. While my fiancée thought it should come with some bread, mustard or something pickled (like we enjoy at home, see paté) I assured her it was delicious and delicate enough to enjoy solo!

Out next was the pork neck rillette with mostarda. This, I would say, was the deal on the menu. Quite a prtion for the $6 price. Perfectly executed pork rillette served with thick crusty toasted country bread, mostarda and some salt for sprinkling, which wasn't that necessary. We also got a choice of 3 cheeses. I requested the Mahon Curado and asked Kyle to choose two others for us. And out came the Mahon Curado, with a great peppery bite about half-way through and a touch of smoke it seemed. The Prairie Breeze cheddar from Milton, IA, was the best surprise of the cheeses, smooth, creamy and nicely sharp. Last was a wedge of the triple cream Délice de Bourgogne, quite soft and cream-tastic, yes, cream-tastic!

Our only selection from the Plancha section was the Pork Blade Steak with 'nduja & honey. It was a seared piece of pork blade over a smear of 'nduja and topped to the side with an arugula, parmesan and lemon juice salad (always a winner in my book). The pork was tender and had a perfect amount of the natural fat left on. The 'nduja was a bit sweeter than what I have had in the past, but man was it great, a nice accoutrement for the entire dish, including that awesome salad.

Since it was a celebration meal we of course opted for not only dessert but some cordials as well. We ordered up some soft serve, an olive oil ice cream topped with a dash of more olive oil and the gianduja chocolate (what a resemblance in name to that calabrian sausage!) garnished with hazelnuts. Both were quite nice and a perfect finish to the great meal. We enjoyed a glass of Tuaca and another of what I think Kyle said was St. James, an almost port like cordial that was chilled and slightly sweet. With our meal, I should add, we enjoyed a delicious 2007 Barbera d'Asti. It was nicely fruity, big enough to cut through some of the fatty items but not to big to overpower the more delicate things. 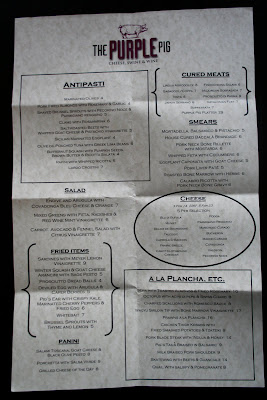 The Purple Pig was a great expereince. I announced happily that we'd be back, regularly. It isn't too far from the restaurant at which I work and the Pig serves well past our closing time. There was a lot on the menu I wanted to try and simply didn't have room for, so this too assures my return. And for a Michigan Ave. address, the prices are pretty good, even for a cook's budget. Now to just talk them into an industry benefit/discount! The service was quite good. Kyle didn't know it all, but he also never acted like he did. He would always get a correct answer instead of trying to BS us. Both Jimmies came by often to check in on our experience and even struck up conversations when they knew I was in the industry. Jimmy Sr. even sent me home with a little something for my next batch of 'nduja!
at 11:59 AM