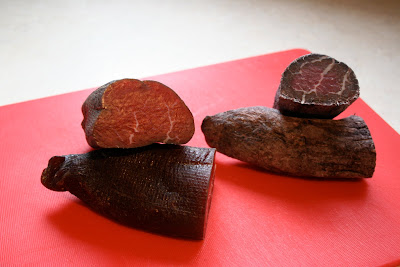 Just to be sure, I made a salt water solution and wiped down the Beef version and threw it in the fridge for a couple hours to dry it off. And after doing that it looked even more saturated in an outer layer of salt. When I sliced the bresaola in half it was interesting. On left, the Charcuterie version looked just as you hoped it would. A beautiful rich rosy color, even and moist. While the Beef version had a definite dark ring and more ruby center color that was much more constricted in size. They both still smelled very much like their cure, herbal for the the first version and red wine & garlic for the second. 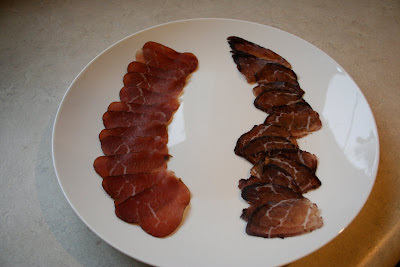 Last night I took them into work to use the slicer for the best results. Taste-wise the Charcuterie version tasted exactly as it smelled, heavy on the rosemary, but in every way you would expect. Nice salt, good, though slightly chewy texture. The Beef version, which has lost its rosy center since I sliced it last night, was a bit more firm, but not really chewy. It is though quite salty. This seems to back up the idea of the exterior color coming from being over-saturated in salt. I do like the red wine and garlic flavors of this version though. In my next preparation I am going to try to find a happy medium. I will lay off the rosemary a bit while also figuring in a wet part of the cure to incorporate that extra flavor, but definitely without the extra salt. Now to figure out which cure goes first, I'm thinking the dry cure. I am also in the process of finding a concealed drying chamber (fridge) so I can slow down the drying (controlling humidity) to promote more flavor maturation inside my meats before they lose all their weight.