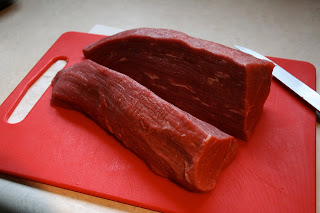 The Charcuterie recipe includes salt, sugar, cure #2, pepper, rosemary, thyme and juniper. The cure is applied at 2 points. One at the beginning of the cure and the rest is applied a week later for a total curing time of 2 weeks. Like most cures that require lots of flipping or attention, I tend to use my trusty Foodsaver™ to vacuum-pack the items to keep the cure in constant contact all over the meat.

The wet cure of the Beef version was almost more intriguing because it was less expected. It was a one-time cure for two weeks, untouched. It included salt, red & white wines, rosemary, bay, garlic, black pepper, dry red chilies and orange zest. This is kind of nice that it doesn't require any type of curing salt which makes it nice for home adventurers. But since I have plenty of #1 and #2 at home they never slow me down when it's called for in a recipe. I also vacuum packed this and did just what the recipe said, "throw it in the back of the refrigerator for two weeks." 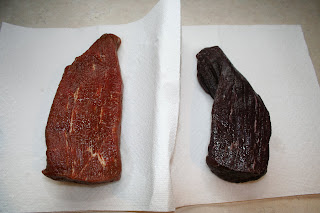 Since this was my first bresaola venture I became quite excited to try two versions and am still anxiously awaiting the chance to taste and compare. They both finished their cure at the same time, after two weeks. They had both already started to firm up a bit and by the end of the second week they were rather firm. The dry cured version had a nice herbal aroma that can still be smelled just by walking over to my drying spot. The wet version took on a rich ruby color from the wine and has me quite curious about how the interior is colored. It actually acquired a slight twist from the position it was in while curing. I rinsed both pieces off in cold water and let them temper on the counter for 3 hours. Next I wrapped them in cheesecloth, labeled them and weighed each piece. The first recipe calls for a 3 week drying period while the second only says 2 weeks.  I am looking for a 40% weight loss on these so I will go by weight rather than time, though I will definitely note the time it takes. I will also note that my "split down the middle" actually left the Charcuterie recipe with a slightly larger piece as is visible in the photo, it wasn't a result of the different cures. The Beef version has firmed up noticeably more than the other. 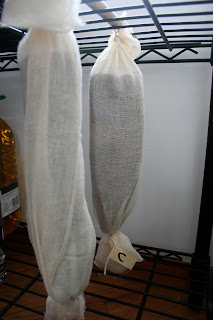 After 8 days they are both coming along nicely. The Charcuterie version has deepened in color to just lighter than what the Beef version looked like out of the cure. It has lost about 35% of its weight already and should be at 40% in about a week, a week ahead of schedule. It has a nice firm feel on the exterior but with a slight squeeze it gives and lets you know the center is nice and tender. The Beef version has lost 33%, but I could hurt someone by hitting them with it. It is super firm with only the slightest give in the center. It has become even darker in color, almost looking black. It has also started to form a few tiny patches of very thin white mold. It's nothing to worry about yet though. A couple days ago I increased the humidity in my drying area. While I don't really have a way to measure it, it seems to have slowed the weight loss down nicely. These and my 'nduja were losing weight faster than a sorority girl trying to fit into that bikini for Spring Break. I have been shopping around for a fridge to set up a concealed drying environment to better control the humidity. Besides, come Summer my drying corner won't be sitting at such a perfect temperature.