Ever since I was a little kid there has been a place in my heart, and belly, for the chewy goodness of beef jerky. Whether it was the simple stuff in the plastic zip-locks at the grocery store or the clever use of the scraps they used for the shredded jerky that they packaged into the "chewing tobacco" dip cans found on the counters of gas stations across Illinois, I gobbled it up. Even at a young age I appreciated the history of salting and drying meat to save for later. While I personally never had to worry about storing the meat from a whole buffalo during a long and arduous journey, the lore of it intrigued me. And so did the taste. Until the late 90s I had only ever had a beef jerky. But while living in hunter-central Wisconsin I had my first venison jerky and loved the mild gaminess of it. Unfortunately I haven't had it since.

There was a turning point for me earlier in that decade when I found a jerky recipe in the "How To" section of a Maxim Magazine. I had never considered that it could be made at home. I guess I bought into that "slabs of meat drying in the plains over a wooden rack" idea a little too much. Thanks Jack Link. But the idea was exciting and frugal for me. I could make this stuff at home and not have to pay a ridiculous amount of money for such little product. So before I knew it I was making the good stuff a couple times a year, and it never lasted long. Not because it spoiled, but because I devoured it! I remember it being a combination of soy sauce, worcestershire sauce, sugar and hickory liquid smoke (and of course a couple other little things). It was oven dried at the lowest setting over night. I don't recall what cut it called for in the recipe, but it ended up being only slightly cheaper than buying the stuff in the bag. But like we often feel when we create something delicious, I did it myself! 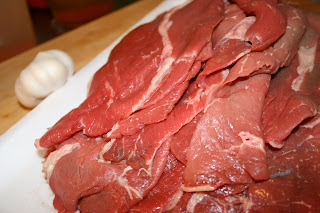 When I bought my Gardenmaster Dehydrator I immediately set out to create some more delicious jerky. After digging through my stack of recipes I was unable to find that old torn-out page from Maxim. But there is no shortage of recipes online. I was surprised to see how many of them also included those same main four ingredients. Others included various seasonings, teriyaki sauce, barbecue sauce, ketchup, etc. So out of curiosity I inspected the labels of some of the brands I grew up eating to see what created the flavor I was most familiar with. And to no surprise, there they were again. While I imagine my Crow indian ancestors were not fermenting soy beans like their friends across the Pacific or creating an anchovy based sauce like their future enemies across the Atlantic, I am confident that the sugar/sweetener and smoke were available to them. But I enjoy the flavors added by these more recently available items, so why not use them?!

My basic marinade consists of those same things, 2 parts soy sauce, 1 part worcestershire, 1 part light brown sugar and black pepper. The total amount depends on how much meat you're doing. For the 10 pounds I did for this post I used a cup per "part" and it was just enough. I simply mix the ingredients and give it a little time for the sugar to start to dissolve. If you want to add some smokiness, remember that liquid smoke packs quite a punch so don't over-do it. I don't like to use the stuff. In nicer weather I'll throw the mostly dehydrated jerky into the outdoor locker-smoker for about 45 minutes to finish off the drying while adding some "dried by the fire" effect, and it's great.

I like to use a less expensive cut for my jerky, so I usually use inside round or top round. I saw my grocer had inside round, presliced (just thick enough) on sale for $1.99/lb so I grabbed 10lbs. It is important to choose a lean cut without much connective tissue. The fat isn't always a bad thing though. Fat tends to go rancid after a while. But since I like fat and my jerky never lasts long enough for anything to go bad or rancid, I tend to be OK with a little fat. The connective tissues can be troublesome though. Jerky is meant to be, well, jerky. But grisly and over-chewiness because of connective tissues is off-putting and kinda gross. So avoid this for sure. I have the meat sliced seemingly thick at about 1/4". You can go a little thinner for a shorter drying time but you have to watch it closer. It also marinates quicker if you go thinner. It is nice to consider if you are less patient or don't have a dehydrator and use the oven. One important thing about the slicing of the meat is to ask them to slice it with the grain. This gives you the long tearable stands and contributes to the desired chewiness.

Marinate the meat for at least 12 hours in a non-metal container. Zip-lock style bags work well too. I will get in the meat and mix it up with my hands to insure an even distribution of the marinade. I also will occasionally put a paper-towel over the top layer to keep it in contact with the marinade, as I did in this batch that had just enough marinade. Since I have only 4 trays for my dehydrator, the last batch stays in the marinade for almost twice as long as the first while it waits for its turn! After about 24 hours though it has absorbed about all it can take on flavor-wise and it's just staying moist at this point. 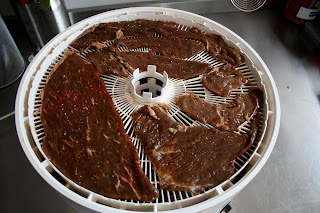 For my dehydrator, I set the temp at 125˚ for about 5-6 hours for the 1/4" slices. You want the meat to be dried and chewy, but not inedible. This might be tricky for some. You want it to give when you try to flex/bend it, without cracking. If you go too thin on the slicing this happens much easier. In this post the meat was a little under the 1/4" so I went for about 3.25 hours and it was perfect. If you don't have a dehydrator, you can do this in your oven, paying attention to its progress. Set your oven to its lowest setting, usually between 175-200˚. Lay out the meat on a sheet tray, preferably with some sort of drying rack on it to allow better evaporation. When I did this in my oven back in the day I did it at 175˚ overnight, about 8-10 hours. But since each oven varies as well as the thickness of your cut, you'll have to be able to make judgement on this method just like the dehydrator method. Again, dry but not too dry as that it cracks when you try to fold it.

A few variations or fun things to do when making jerky come from the seasoning. In the past I have added curry powder, BBQ spices, fresh cracked black pepper, togarashi & sesame seeds, and a whole plethora of fun or ethnic seasonings. I do this at one of two phases, depending on its form. All of the dry things except the Japanese items can be added either into the marinade or directly onto the meat once on the dehydrator trays. I do the togarashi & sesame seeds after the marinade. I also prefer to do the cracked pepper after the marinade for a fresher taste.

I tend to place these immediately into a zip-lock bag out of the dehydrator. It prevents them from getting any drier. The 10lbs. batch gave me four rounds in the dehydrator, each round filling 2 quart-sized zip-lock bags. 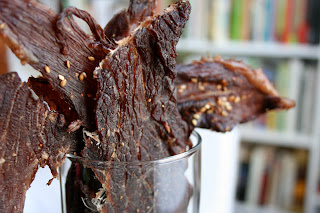