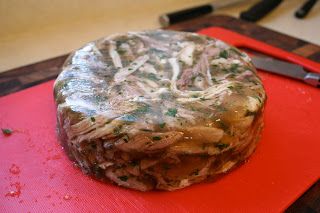 I had about 40qts of stock/cooking liquid left from the cooking of the whole head I used for my chaps. I strained it and put it back on to reduce much further. I added two pig trotters I had picked up with the head. I had picked about 1 loose quart of remaining meat. I then shreaded/pulled the meat into smaller strips as opposed to fat chunks. Once I reduced the liquid down quite a bit, to about 8 quarts, I set aside 1qt that I seasoned and added about 2T of white balsamic vinegar. I then tossed the meat in about 2T of chopped parsley. Since my terrine holds about 4lbs. of meat, I deemed it way too big to use. Instead I lined a 2qt. pot with plastic wrap and found another pot that would fit nicely just inside. I then placed the meats inside the larger pot and poured the slightly cooled liquid in to just cover the meat. I covered the bottom of the second pot in plastic and placed it inside the other pot to slightly press the brawn. It went back into the fridge for several hours to set. 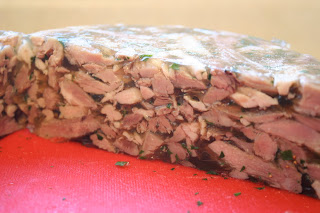 A few hours later I pulled the plastic out that lined the large pot and with it came the round brawn. I could tell right away that I hadn't reduced the liquid far enough. So I warmed the whole thing enough to re-liquify the stock. I then disposed of this already seasoned batch and further reduced the remaining 7qts down to about 3. I then started the whole potting process over again, using a touch less salt and a bit more vinegar. The next day when I un-potted it, it was nice. The taste was much like that first French version I had. This tends to be served in slices about 1/4-1/2" thick. To avoid an overpowering porkiness I might consider adding gelatin in the future and reducing it less.
This is a great product for those of you that love the flavor of pork. It can be quite strong when done in this manner, but you're tasting nothing but pure pork flavor. This dish is normally done with the meat from the entire head, while I used everything but the jowls and tongue since I used those for the Bath Chaps. Like so many cold pork preparations, it is nice with some toast and mustard and maybe a little green salad with a vinaigrette.
at 11:06 AM